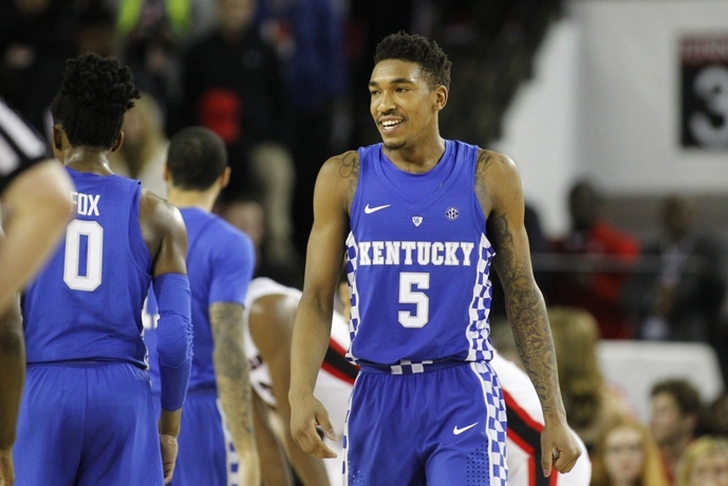 The Philadelphia 76ers are looking to address their needs in the backcourt with the No. 3 overall pick, but with them moving Ben Simmons to point guard, they are expected to pass on the point guards at the top of the draft.

They have been heavily linked to Kentucky's Malik Monk to fill their need at shooting guard and for more perimeter shooting, but drafting him third overall would be a reach. Because of that, they could be looking to trade down.

There has been some talk about them trading the pick to the Kings and getting the No. 5 and No. 10 picks in return, and Moke Hamilton of Basketball Insiders expects that deal - or a similar one - to happen.

Sources familiar with the Sixers’ thinking still have Malik Monk ranking quite highly on their depth chart. Considering the presence of Jahlil Okafor, Joel Embiid, Dario Saric and Ben Simmons, it would be curious for the Sixers to reach for Monk at three. So one scenario that’s being mentioned as plausible is for the Sixers to engage the Kings on a trade that would end up with the teams swapping their number three and number five picks. The Sixers would presumably land Monk while the Kings, in moving up to three, would guarantee themselves Fox. For that reason, I stick with Monk and Fox going at three and five, though they could flip flop if the aforementioned trade does happen.

Monk is undersized as a shooting guard at 6-foot-3, but playing alongside the 6-foot-10 Ben Simmons would allow him to play off the ball on offense while defending opposing point guards.

Even if Philadelphia is unable to trade down, they may still pick Monk at No. 3 - that's how high they are on him.