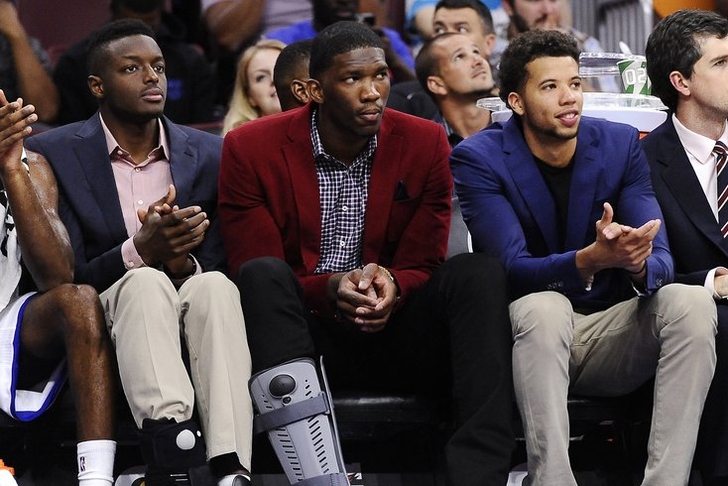 The Philadelphia 76ers drafted Joel Embiid with the third overall pick in the 2014 NBA Draft with the plan of the center being one of the franchise's centerpieces, but that plan may already be in jeopardy.

Embiid hasn't played a game for the Sixers yet as he recovers from foot surgery, and he's apparently let himself go.

According to a Philly.com report, Embiid is nearly 300 pounds and the Sixers have serious questions about his maturity and work ethic.

Embiid's, who's playing weight at Kansas was 250 pounds, reportedly had a “blowup” with assistant strength and conditioning coach James Davis, and was sent back to Philly while the team was on the West Coast as a result.

The 20-year-old also "hasn't been a willing participant" in team workouts, and has even blown off some workouts, according to the report.

"He's a young, 20-year-old kid who is trying to figure his way into being a professional basketball player and learning life," Sixers forward Luc Mbah a Moute said, who has served as a mentor to Embiid (a fellow Cameroonian) for several years. "Obviously, you can see some of his immaturity [in] his tweets sometimes. But you can also understand how mature he is in certain situations the way he handled himself. . . . He's a good kid, man.

Follow our Philadelphia 76ers team page for all the latest 76ers news and rumors!