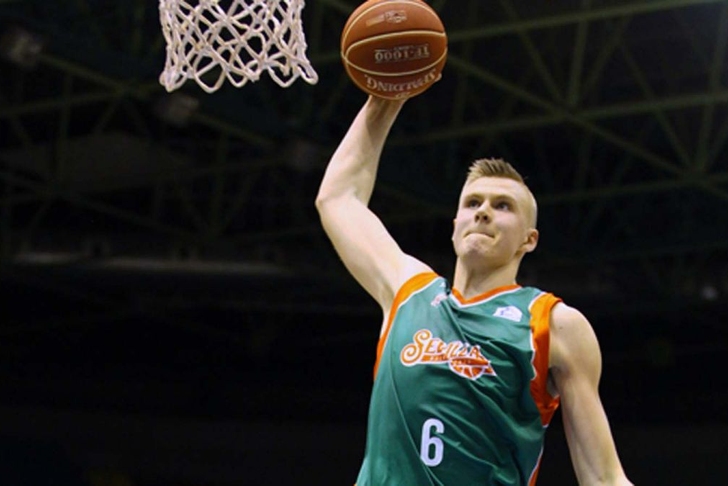 The Philadelphia 76ers have the No. 3 pick in the NBA Draft, and there has been a lot of clutter to sort through as to their plans with the pick. Here are three rumors you need to know:

One name on the radar? Rising international sensation Kristaps Porzingis. Here’sSam Vecenie of CBS Sports with his thoughts on the potential fit:

I think Porzingis was already in play for them, to be honest. Hinkie has been over to Seville to see him play multiple times, and was at the workout in Las Vegas longer than any other general manager to watch and speak with him.

Under Hinkie, the 76ers have defaulted to the best player in the draft with the highest upside. His goal is to find a superstar, then build around that player. If Hinkie believes Porzingis to be that potential superstar, I don’t think he’ll really look at the roster and draft for need. He’ll take Porzingis, and live with the result.

Having said those things, I will mention that I think Porzingis would be an excellent fit with Embiid in general. Embiid could utilize his terrific post skills and traditional rim protection/rebounding, while Porzingis spaces the floor, moves well laterally on the perimeter to shut off penetration, and protects the weak side of the rim. The two players complement each other really well. Now, there’s still the matter of Nerlens Noel being in town, but one would have to think that if both Embiid and Porzingis do work out to the best of their potentials, they’d be able to find a great landing spot for Noel due to his age and defensive skill.

Porzingis is one of three prospects the Sixers are considering with their pick, according to ESPN’s Chad Ford:

Karl-Anthony Towns and Jahlil Okafor are expected to be the top two picks in the draft, but if one of them were to fall to the Sixers at No. 3, Philadelphia will likely take them over Russell, Mudiay, and Porzingis.

Philly To Block Knicks From Drafting Okafor, Towns Or Russell?

The New York Knicks have eyes on the trio of Kentucky C Karl-Anthony Towns, Duke C Jahlil Okafor and Ohio State PG D’Angelo Russell with the #4 selection in the 2015 NBA Draft.

However, the Sixers sit just ahead of New York at #3 and reportedly will block the Knicks from selecting one of the aforementioned three if the top two go as many predict.

According to a league source, the Sixers, who pick third, still have a firm Big 3 of Karl-Anthony Towns, Russell and Okafor and won’t let any of the trio slip to Phil Jackson. Despite their young, marquee depth up front, the Sixers would take Okafor even if it’s to collect an asset to trade later.

Speculation that Russell is trying to avoid being picked by the moribund Sixers escalated when he canceled workouts with them this weekend. There also were rumblings that perhaps the Lakers, after working Russell out, had given the Ohio State combo guard a guarantee at No. 2. The Philadelphia Inquirer reported he was just “real sick’’ and a Sixers workout could be rescheduled. Russell has told reporters he also has agreed to work out for the Knicks.

The Knicks’ best bet to secure either Towns, Russell or Okafor is for a fast-rising prospect like Emmanuel Mudiay or Kristaps Porzingis to go to the Lakers at #2, leaving one of the coveted three on the board for New York to draft.