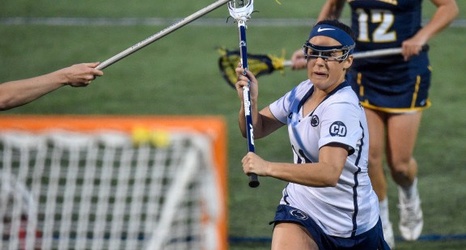 UNIVERSITY PARK, Pa.- Saturday marked the Big Ten opener for the Penn State women's lacrosse team, as they took the field against Rutgers. The Nittany Lions used a consistent offense and aggressive defense to dominate the Scarlet Knights, securing their first Big Ten victory of the year with a 16-9 win.

The team started the first half off on a strong foot. Penn State was scoring a goal almost every two minutes throughout the entire half, giving the girls a significant lead of 11-2 at the break.

Kelly Daggett, Ally Heavens, Madison Cyr, Madison Carter, Steph Lazo, Jenna Mosketti, and Maggie Gallagher all scored during the half lending a hand in their early lead and proving that there is widespread talent across the team's offensive end.

See full article at Official Site of the Nittany Lions