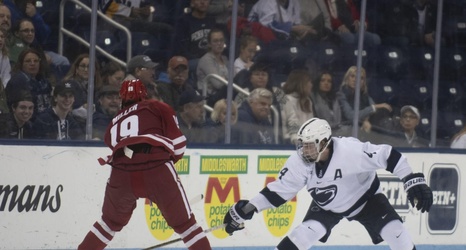 Despite dominating in the shot department, Penn State found itself on the wrong end of a 60-minute fight against the Big Ten’s last place team on Friday night.

Tied 3-3 late in the third, the Nittany Lions fell victim to a Wisconsin game-winning goal off the stick of Dylan Holloway with 1:04 remaining in the game. The 4-3 result is Penn State’s first loss to the Badgers this season.

The Badgers got on the board first with two goals in a span of 11 seconds early in the first period, putting the pressure on the Nittany Lions.