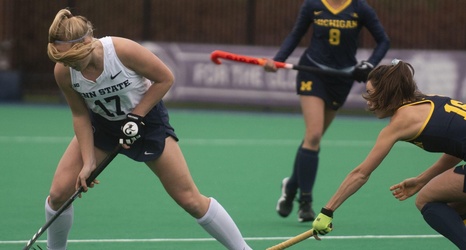 Penn State headed into Sunday’s meeting with Iowa looking for revenge after a 1-0 loss on Friday against the Hawkeyes, but couldn’t fight them off.

Fifth-year forward and midfielder Ellie Holley had two goals for the Hawkeyes to lead her team to victory, 4-0.

The first goal of the encounter came on a pass from Holley and was knocked into the cage by sophomore forward Gery Schnarrs of Penn State, in an attempt to save it. The goal came just three minutes into the game to put Iowa on top.

Sophomore midfielder Sophia Gladieux attempted to put Penn State on the board with a reverse chip shot to the back of the cage off of a corner opportunity, but the goal was called back due illegal height of the ball.