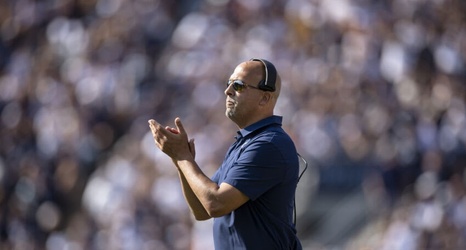 STATE COLLEGE, PENNSYLVANIA - SEPTEMBER 11: Head coach James Franklin of the Penn State Nittany Lions celebrates after a play against the Ball State Cardinals during the first half at Beaver Stadium on September 11, 2021 in State College, Pennsylvania. (Photo by Scott Taetsch/Getty Images)

James Franklin, and throat lozenge company Halls, are teaming up to sooth Penn State Football fans’ lost voices at the White Out.

During one of his weekly press conferences, Penn State Football head coach James Franklin offered to buy fans throat lozenges, if it meant that the White Out would be the most challenging environment in college football.