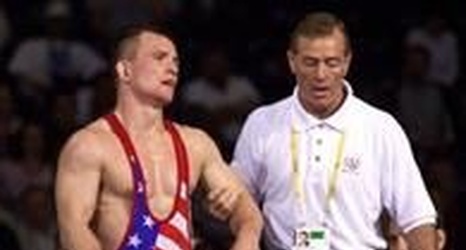 A dejected Cary Kolat of the USA is lead off of the mat by his coach Bruce Burnett after Kolat lost to Iran's Mohammad Talaei in a qualifying freestyle wrestling match at the Sydney Olympic Games, Wednesday, Sept. 27, 2000. Kolat defeated Talaei earlier in the day but the two were asked to wrestle a second time when the Iranians protested the outcome. Kolat lost the second match

After six years leading a relatively upstart program in Campbell, former Penn State wrestler Cary Kolat was named the new coach at Navy on Friday, as first reported by Bill Wagner of the Capital Gazette.