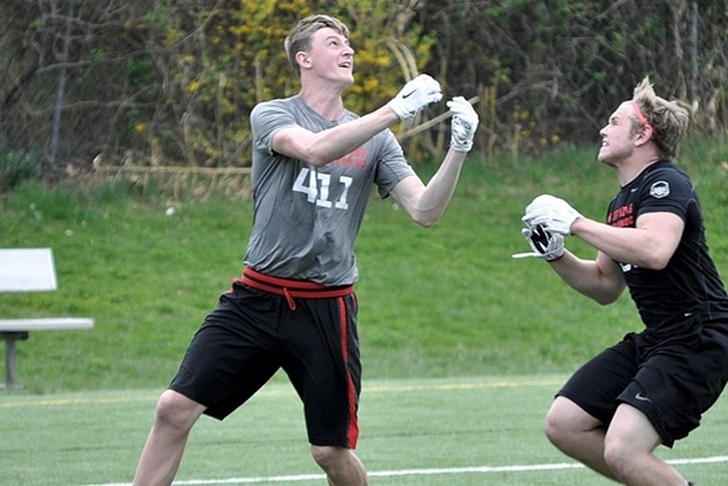 The Penn State Nittany Lions are wrapping up of spring practice as they prepare for their upcoming spring game, but that doesn't mean head coach James Franklin has taken a step back on the recruiting trail. Here are all the latest news and rumors surrounding Penn State football's recruiting:

"It was good. I went up with Michael and it was nice to get to talk with the coaches again and see their style of practice,” he said, via 247sports. “I like what I saw offensively and the pace of the practice was fast which I liked a lot.

"When I went up for the Junior Day a little while ago, I really got introduced to the new offensive coordinator and the new tight ends coach, [Ricky] Rahne, and the energy that they brought to the table. I could tell he’s really excited about what he’s doing. He’s very passionate about it. We watched some film and talked about how they would use the tight end position and how I would be used.”

Penn State is the heavy favorite to land him, but he is also considering Ohio State, Notre Dame, Michigan and Duke. The 6'7", 210-pounder is ranked as the No. 14 overall prospect in the 2018 class.

4-star DT impressed on visit, gets offer
Four-star defensive tackle Rutger Reitmaier (Nashville, TN) was also in attendance during Saturday's practice, and received an offer from the Nittany Lions on the visit.

“I had an amazing visit and I'm very excited about the offer,” he said. “I really, really enjoyed getting a chance to talk to the coaches. They said they wanted to continue to grow a relationship with me and they were really impressed with my film and I would work well in their system.

"It's all really compact and it doesn't feel like there is 40,000 people that go there. I felt comfortable there. Very high on my list. (I liked) how great the coaching staff is and how they made me feel at home there they provided me a lot of information about the program."

Jurkovec also attended last year's spring game in Happy Valley, but is using this trip as an opportunity to meet with and talk to new offensive coordinator Joe Moorhead in person.

Head coach James Franklin views Jurkovec, who is the top-rated dual-threat quarterback and No. 9 overall prospect in the 2018 class, as the program's quarterback of the future. He would be expected to compete for the starting job as soon as he steps on campus.

However, Penn State is far from the only school going hard after Jurkovec. He is also showing heavy interest in Notre Dame, along with Pitt and Ohio State.

Jurkovec passed for 2,560 yards and 20 touchdowns and just four interceptions as a sophomore, while adding another 1,250 yards and 11 touchdowns on the ground.