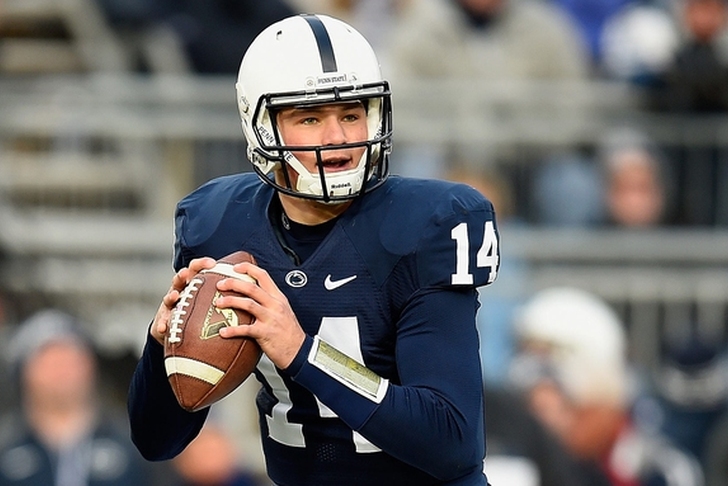 There are two prevailing schools of thought regarding Penn State Nittany Lions quarterback Christian Hackenberg's future as an NFL Draft prospect -- that he'll be an unequivocal bust or a once-in-a-generation talent worthy of a #1 pick.

ESPN The Magazine laid out the case for both in their August 18th College Football Preview. First, the negative:

"To his many critics, including a small but vocal contingent of Penn State die-hards, his projection as a top-five pick is one of the more baffling proclamations about a player in recent memory. Hackenberg's completion percentage (55.8 percent, 88th in the country in 2014) is used to question his accuracy, his touchdown-to-interception ratio (12-15) as proof that he forces throws into coverage. In 13 games, he was sacked 44 times, and while no one pins that solely on him, it points to heavy cleats and renders him a relic among the fleet-footed passers permeating the college game. Jeff Risdon, an analyst for RealGM.com, tweeted after PSU's loss at Michigan that Hackenberg was "undraftable" and the "worst quarterback I saw all year." The website Pro Football Focus graded him as one of the least accurate QBs in the country, even when he wasn't facing pressure (No. 74 out of 86 qualifying FBS QBs)."

"There are too many moving parts on a football field, too many outcomes dependent on others, to make judgments based on one player's numbers. Instead, NFL front office types look at tape of Hackenberg and see, potentially, the next Andrew Luck. Maybe even the next Tom Brady. Give him enough protection to set up in the pocket and he has the acuity to quickly assess defenses, to look off safeties and corners with a glance. Give him receivers who create separation and he has the arm to uncork NFL-level spirals into windows so tight that most college quarterbacks wouldn't even consider the risk. Not to mention he is built like a lumberjack, possesses an analytical mind captivated by nuance and shows the determination to do the mundane film work necessary to maximize his abilities. 'I think he is easily a top-five pick,' an NFL scout says."

Regardless of analytical assessments, Hackenberg enters his junior season as one of the most polarizing talents in all of college football. It's a crapshoot on just how he'll stand up to the pressure, but it'll sure be fun to watch.