The Latest Updates on the James Franklin - Penn State Situation 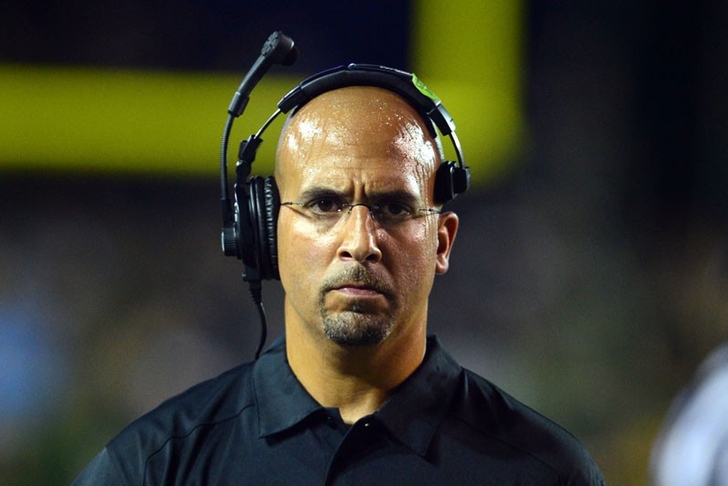 A number of outlets are now reporting that James Franklin will be Penn State's next head coach. CBS' Bruce Feldman was the first to report the move.

As of Wednesday evening, it's still unclear whether or not James Franklin will be Penn State's next head coach. We've heard a number of conflicting reports throughout the day, and with nothing definitive to turn to, it makes the most sense to lay out the information we've received and let readers draw their own conclusions.

- Penn State historian Lou Prato tweeted that he'd heard from a source that Franklin will be introduced as head coach tomorrow:

Heard from source Frankin en route to PSU to be introduced tomorrow as HC. We shall see!

Prato is a well-respected author who has written several books on the Nittany Lions, and has a number of friends in the athletic department. - James Franklin is (or was) on vacation with his family in Destin, FL. PSU beat writer Derek Levarse of the Wilkes Barre Times-Leader tweeted this, linking to a flight report for a jet that had been chartered from State College to Destin:

From that @jefflockridge story: Franklin has a place in Destin, Fla., which is where this plane flew to from PSU: http://t.co/bTxh41nf36 — Derek Levarse (@TLdlevarse) January 9, 2014

The article Levarse mentions comes from Tennesseean writer Jeff Lockridge, who covers Vanderbilt and the SEC.

- On the other side of things, FootballScoop (who have done a great job of covering coaching changes over the past few weeks) tweeted this:

At Penn State, I was told that they have not reached a deal at this time.

I do not believe that is happening> RT @Pasik1982: @footballscoop but he may be flying in as we speak.... — FootballScoop Staff (@footballscoop) January 9, 2014

- We've received word from one of our own sources that Franklin will accept Penn State's offer. Since this is the same source that told us the deal was imminent on Tuesday, we're waiting to independently verify this claim before we state with confidence that the deal is complete. The source also tells us that Franklin will immediately move to retain defensive line coach Larry Johnson Sr., a much-loved figure among players and fans with a great deal of recruiting clout.

While exact terms of Franklin's contract weren't provided, the source told us that it includes a "significant" buyout clause active for the first three years, an addition meant to prevent Franklin from leaving in a similar manner to Bill O'Brien.