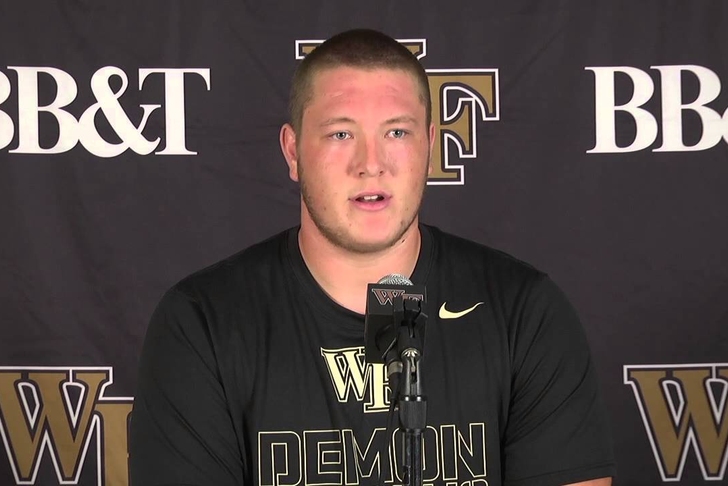 Penn State has extended an offer to Helms (pictured), a center transferring from Wake Forest who was originally part of the class of 2013. Helms was a three-star recruit out of high school, and he chose the Demon Deacons over Colorado State, UNC and South Florida. Helms started 23 of 24 games at Wake, and would have to sit out a season before playing. Named to the Freshman All-American team in 2013, Helms has two years of eligibility remaining.

The #2 player in the Class of 2016 hails from Paramus, NJ, putting him well within James Franklin's recruiting sphere. Alabama currently leads the race for the 6'4, 285-pound DE, but we're hearing the Nittany Lions are definitely in the mix. Getting him on campus for an official visit (he's already taken two unofficials) will be a high priority next fall.

The three-star DE from Philadelphia was leaning towards Penn State, but an offer from Florida has reportedly cast some doubt on whether he'll commit to the Nittany Lions. Miller has three official visits scheduled before national signing day on February 4 - Arizona State on the 16th, Penn State on the 23rd and Miami (Fl.) on the 30th.

*Update* Walker shocked many fans and analysts by committing to Ohio State at halftime of the Playoff National Championship Game. He has a long way to go before next year's signing day, but it's safe to say this lowers his odds of coming to Penn State significantly.