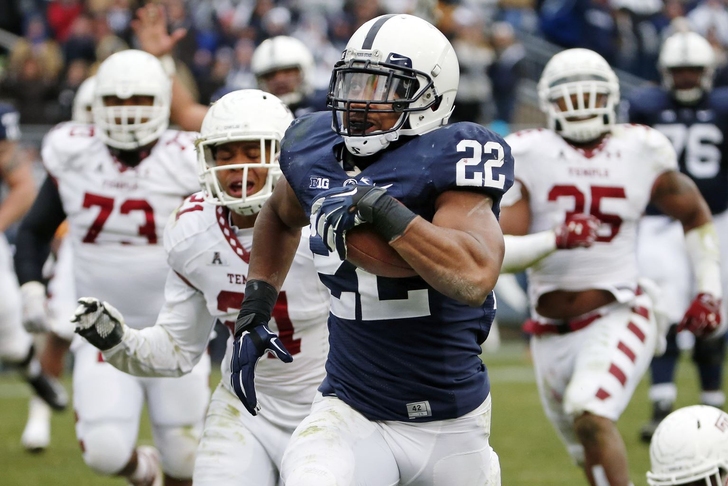 Penn State brings plenty of momentum into the 2015 season - the Lions are coming off an encouraging bowl win against Boston College, they're losing very little talent to graduation and the NFL, and James Franklin's excellent recruiting class will help reinforce the team at key positions.

That said, there are a few things that need to change if the Nittany Lions are going to be in the mix for the Big 10...here are three things they need to do if they want to win 10 games in 2015:

Hackenberg was the nation's top QB prospect when he came to State College, but he regressed significantly in 2014 after an encouraging freshman year. Hackenberg threw fewer touchdowns, more interceptions and saw his completion percentage slip from 58.9% to 55.8%.

A great deal of that is due to Penn State's issues on the offensive line. The Lions routinely failed to give Hackenberg the time he needs to make reads and work through his progressions, and while some missed reads and bad throws were on Hackenberg, fans can't expect him to excel without adequate protection.

The Lions have four 4-star offensive linemen coming in, including JuCo standout Paris Palmer, and now it's up to the players and the coaches to make sure the team can adequately protect their quarterback.

Find A Running Back They Can Rely On

The Nittany Lions had 12 running backs on their roster in 2014, but none rushed for more than 700 yards on the ground as Akeel Lynch and Bill Belton ended up splitting the majority of the carries.

With Belton graduating, the job will likely fall to Lynch, and this team will be unrecognizable if he can become an every-down threat. Offensive coordinator John Donovan came under fire for Penn State's inability to run the ball in 2014, and the numbers told the story: PSU's 1325 rushing yards put them 115th out of 128 FBS teams, and their average of 2.9 yards per carry puts them 125th out of 128.

Running the ball will keep defenses honest and open up the field for Hackenberg - if Penn State wants to be one of the best teams in their conference next year, improving the running game is not optional.

Penn State's defensive numbers in 2014 were excellent, but what's truly impressive is that they did it with their fourth defensive coordinator in four seasons. Bob Shoop immediately put his stamp on the Nittany Lions defense, and they rewarded him with a huge raise when LSU came calling.

Now that Penn State knows they have the same DC coming back, they can start building on an impressive campaign on that side of the ball. Starters Mike Hull, C.J. Olaniyan and Ryan Keiser will be gone, but Penn State is bringing back a host of talented players who will need to make sure the team doesn't miss a beat.

The 2015 Lions have tough games on the road against Ohio State and Michigan State, but their 2014 performances showed they can hang with any team in the B1G on their day. If they can keep Hackenberg protected, run the ball and continue to improve one of the best defenses in the country, there's no reason why Penn State can't win 10 games in 2015.