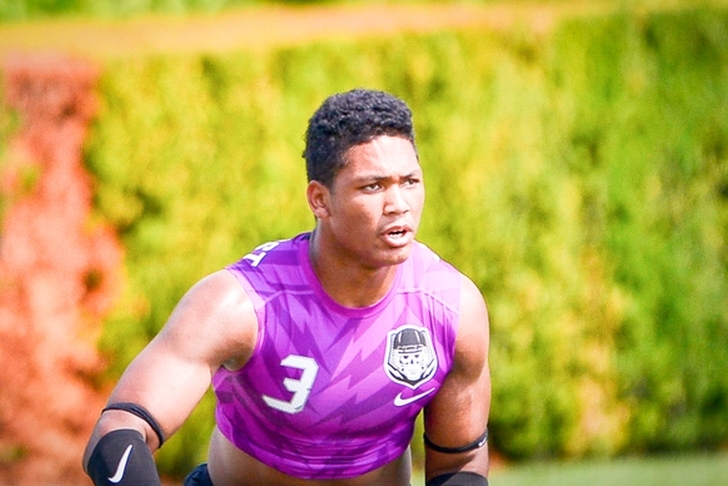 The Pac-12 once again had a solid collective effort on National Signing Day, with two schools in the National Top 15 and three in the Top 25. While USC once again led the way, they were far from the only school to have a strong recruiting class.

A big tip of the hat to 247Sports, as the top recruits are based on their rankings. It's worth mentioning that all of the top 14 players are in the top 110 overall and at least a four-star recruit. With that in mind, let's detail the 14 best 2016 recruits who signed with a Pac-12 school.

14. DT Boss Tagaloa, UCLA Bruins
Tagalo is the first of three UCLA commits on this list. A Signing Day decision, Tagaloa picked UCLA over USC and Michigan. He's the No. 106 overall prospect and the No. 13 DT in the 2016 class.

13. WR Theo Howard, UCLA Bruins
A one-time Oregon commit, Howard committed to UCLA in November and enrolled early. He could have an early impact at WR for the Bruins. He's the No. 102 overall recruit. Download the Chat Sports Android and iPhone app for more on UCLA's class.

12. CB Byron Murphy, Washington Huskies
Murphy is the only Husky on this list, checking in at No. 97 overall. Arizona State was the favorite to land the in-state product, but Washington found a way to secure his commitment. He's the No. 11 CB in the class and the No. 97 overall player.

11. ATH Jamel Cook, USC Trojans
USC landed Cook on Signing Day, helping to give them six of the top 14 players in the conference. Cook hails from Florida, and is the No. 2 athlete. He's the No. 94 overall player and should play somewhere in the defensive backfield.

10. OT E.J. Price, USC Trojans
Price was another Signing Day addition, as USC beat out Auburn and Georgia for the Georgia-based recruit. He's the No. 84 overall player and the No. 8 OT. For more on USC's recruiting class, download the Chat Sports Android and iPhone app.

9. OLB Curtis Robinson, Stanford Cardinal
Robinson is the first of three Stanford additions. He's been committed since April, and is the No. 70 overall player. A four-star recruit, he's the No. 6 outside linebacker.

8. WR Michael Pittman, USC Trojans
Pittman has already enrolled, and has a chance to see the field early. He's the No. 69 overall recruit and one of two WRs on this listed USC landed.

7. WR N'keal Harry, Arizona State Sun Devils
ASU missed out on the No. 2 recruit from the state, but kept the top player. A four-star recruit, Harry is the No. 52 overall player and the No. 7 WR. He has the chance to make an early impact for ASU.

6. QB K.J. Costello, Stanford Cardinal
Costello might not see the field early, since Stanford usually sits its QBs for the first few seasons. The No. 3 pro-style QB committed in March and is the No. 46 overall player in the 2016 class.

5. TE Kaden Smith, Stanford Cardinal
Stanford hopes that Smith and Costello develop a strong rapport. The Cardinal pulled him out of Texas, beating out Alabama and the Longhorns in the process. He's the No. 2 TE in the nation and the No. 37 overall recruit.

4. WR Tyler Vaughns, USC Trojans
Vaughns checks in as the No. 34 overall player and the No. 3 WR. Texas A&M made a late push, but Vaughns committed to USC on National Signing Day. Download the Chat Sports Android and iPhone app for more on USC's class.

3. CB Jack Jones, USC Trojans
Texas A&M made a late push for Jones, just like it did for Vaughns, but Jones is heading to USC. He's a five-star recruit and the No. 22 overall player. While he's listed as the No. 3 CB, he could also contribute on returns and as a WR.

2. DE Oluwole Betiku, USC Trojans
Betiku is the No. 16 overall player and the No. 1 weak-side defensive end in the nation. He's already enrolled at USC and is expected to have a big impact.

1. OLB Mique Juarez, UCLA Bruins
While USC had the most recruits on this list, UCLA picked up the best one. Juarez is the No. 11 overall recruit and the best OLB in the nation. He could play right away for the Bruins, who need some help at LB. He's the top recruit from the state of California.