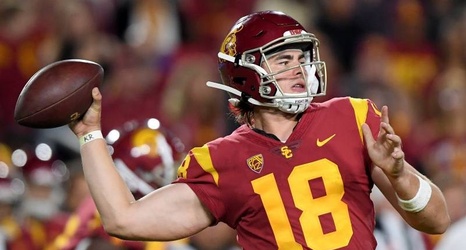 USC quarterback JT Daniels suffered an apparent knee injury in the second quarter of his team's home game against Fresno State on Saturday.

Daniels was sacked on 3rd-and-4 from the Fresno State 15-yard line with 27 seconds left in the first half. His right knee appeared to buckle on the play, and Daniels grabbed at it after he went to the ground.

Medical personnel immediately attended to Daniels, who was helped off the field.

He then went to the sideline medical tent, according to Antonio Morales of The Athletic. He was soon taken off the field, per Keely Eure of USCFootball.