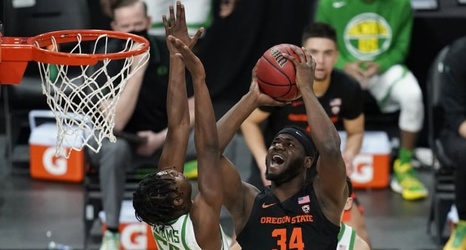 The Pac-12 men's basketball tournament continued play on Friday with No. 5 Oregon State facing No. 1 Oregon and No. 3 Colorado taking on No. 2 USC.

Oregon was the only team to advance without much drama, defeating No. 8 Arizona State 91-73.

The rest of the semifinalists survived and advanced. USC needed two overtimes to put away No. 7 Utah, 91-85. Colorado led by 13 in the second half but held on to win 61-58 after Cal's Makale Foreman missed a late game-tying three-point attempt. Oregon State found itself down 16 but forced overtime and knocked off No.