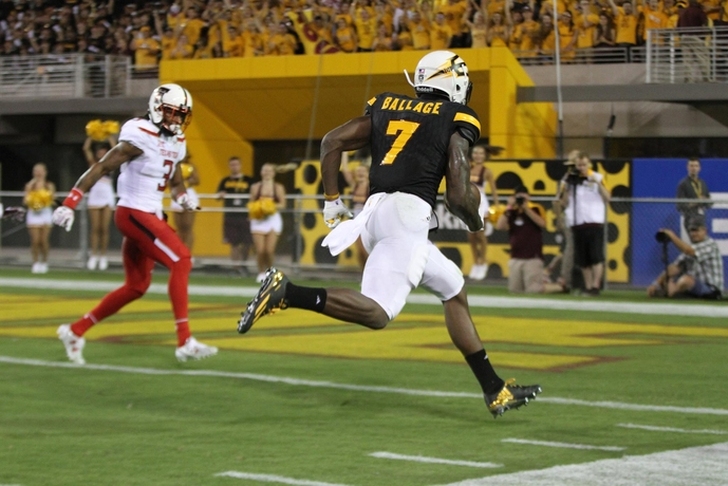 The Pac-12 looked shaky on college football's opening weekend, but almost all of the conference's teams flexed their muscle with big wins this past Saturday. Here's a look at all the latest happenings around the the league below, but we lead off with our Pac-12 Power Rankings heading into Week 3:

10) Oregon State Beavers (0-1)
The Beavers were off after a season-opening loss at Minnesota. That's not the worst thing in the world for this program, but they haven't gotten a chance to improve themselves.

9) Cal Golden Bears (1-1)
Cal got on the board first with a win over lowly Hawaii in Australia, then defensive lapses caused them to lose to San Diego State. Now they get Texas.

8) Colorado Buffaloes (2-0)
The Buffs are 2-0, and that's good, but playing Colorado State and Idaho State doesn't tell you much as to if they're legit or not. This weekend's game against Michigan will.

7) UCLA Bruins (1-1)
Josh Rosen is really good. However, the receiving core isn't, and the defense hasn't been able to stop any running back. There is definite cause for concern.

6) USC Trojans (1-1)
USC got demolished by Alabama, but frankly, that might happen to everyone this year. Beat Utah State 45-7 at least put them back on the right track.

5) Utah Utes (2-0)
Utah's offense turned the ball over six times against BYU, yet their dominant defense still gave up just 19 points in a win. Things are looking good for the Utes...if they can hang onto the ball.

4) Arizona State Sun Devils (2-0)
Arizona State's offense is in mid-season form, shown by them putting up 68 points on Texas Tech. The only problem with that performance was that their defense gave up 55 points. Still, it was an impressive win over the Red Raiders.

3) Oregon Ducks (2-0)
Oregon keeps plugging away and looks promising. Royce Freeman and the offense look great, while the defense seems to be getting better every week.

2) Stanford Cardinal (2-0)
We know that Christian McCaffrey is really, really good. The rest of the team looked questionable against Kansas State two weeks ago, and they enjoyed a bye this past weekend to help sure them up.

1) Washington Huskies (2-0)
Wins over Rutgers and Idaho aren't anything special, but the Huskies have been absolutely dominant on both sides of the ball. They have the fewest weaknesses of any team in the conference right now.

OTHER PAC-12 NOTES
Ranked teams
Three Pac-12 teams found themselves ranked in Sunday's AP Poll, and two were in the top 10. Oregon was the lowest-ranked team at No. 22, while Washington stayed at No. 8 and Stanford stayed at No. 7.

Conference Player of the Week
Arizona State's Kalen Ballage tied a NCAA record with eight touchdowns (seven rushing, one receiving) in the Sun Devils' big win over Texas Tech. When you set/tie a NCAA record, pretty much a given you get player of the week.

Games of the Week
There are several more notable Pac-12 games this coming weekend, headlined by Oregon traveling to take on Nebraska (3:30 pm ET, ABC), and Colorado making a visit to the Big House to take on No. 4 Michigan (3:30 pm ET, BTN). Pac-12 play also kicks off as Stanford will host USC (8:00 pm ET, ABC).