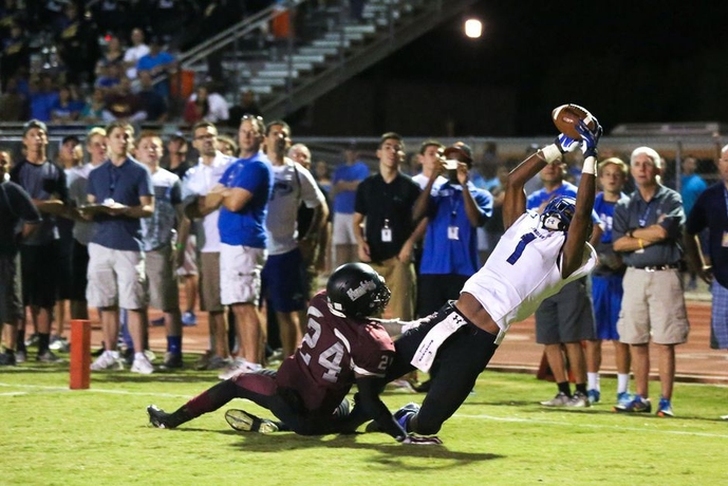 The Pac-12 is one of the best conferences in college football. The conference doesn't have any teams playing in the College Football Playoff this season, but that's because the deep conference beat up on each other too often. The conference can recruit with the best, and it's not surprising that five different schools have a player in the top 10. This is based on Rivals.com's rankings and every player on this list is a top 110 overall recruit. With that in mind, here are Pac-12 Football’s 10 Best Committed Recruits For 2016 So Far:

10. Jared Mayden, DB, Oregon
Mayden is four-star recruit from Texas. He's the only player outside the Top 100 on this list, checking in at 107 overall. He's the ninth best CB in the class of 2016.

9. Dillon Mitchell, WR, Oregon
Mitchell is the second straight Oregon player and also the last one. He's the No. 1 player in the state of Tennessee and the No. 90 overall player. The four-star WR could be a great fit for the Ducks.

8. Breland Brandt, LB, UCLA
The four-star LB is one of just three defensive players on this list. He's the No. 87 overall player the No. 16 player from California. He's an outside linebacker that could thrive as a pass rusher.

7. K.J. Costello, QB, Stanford
Costello isn't the No. 1 recruit for Stanford, but he is the most important. As a QB, Stanford hopes Costello will be the team's future. He's the No. 4 QB in the 2016 class and No. 84 overall player.

6. Kaden Smith, TE, Stanford
Stanford hopes "Costello to Stanford" is a common phrase in the next few years. The four-star recruit from Texas is the No. 6 player from the state. He's also the No. 2 TE and and the 48th best player in this class.

4. Theo Howard, WR, UCLA
UCLA has Josh Rosen at QB and might have found his top weapon in Howard. He's a four-star recruit and the No. 32 overall player. Only four WRs are ranked higher than Howard.

3. Tyler Vaughns, WR, USC
Vaughns and Pittman could be great USC WR combo. Vaughns is a four-star recruit and the No. 4 WR. He's the fifth-best player from California and the No. 28 overall recruit.

2. Curtis Robinson, LB, Stanford
Robinson is the lowest-rated five-star recruit, checking in at No. 23 overall. He's an OLB and the No. 4 player from California. He was a huge get for Stanford.