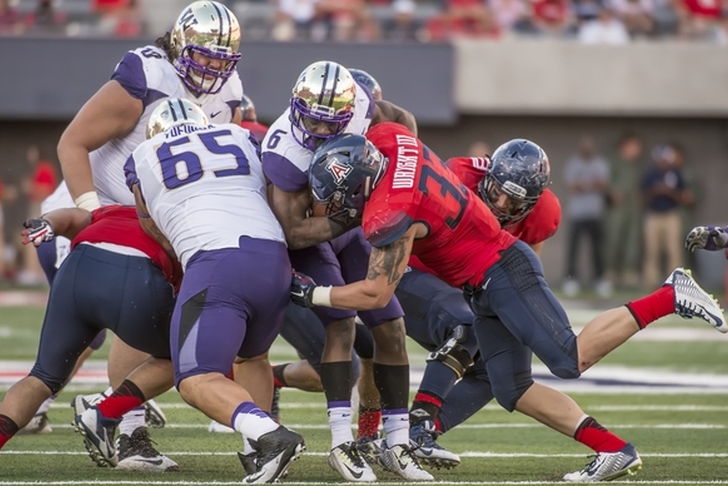 College football is back! More importantly, Pac-12 football is back! Things kicked off on Thursday with UTSA at #22 Arizona and Colorado hitting the islands to face Hawaii. With the powder keg that is every college football season set to explode, we thought it'd be a good time to break things down and give you our Official 2015 Chat Sports Pac-12 Football Preview.

It's a whole new ballgame with Marcus Mariota out of the picture, but Oregon's offense will hum along with very little turbulence with Eastern Washington transfer Vernon Adams under center. The 6-foot QB was passed over by FBS programs purely due to his lack of prototypical size before latching on at EWU. However, he won't need to be a 6-foot-6 statue in a Ducks offense predicated on stretching defenses from sideline-to-sideline and bludgeoning with pure speed. Adams is the perfect QB for that -- a firecracker on the run who can make any short-to-intermediate throw you ask of him in space.

The secondary is spotty, which combined with Adams' relative lack of big-game experience, should/could lead to the Ducks' downfall Week 2 in East Lansing (Michigan State). However, the defense is stacked up front and the Ducks will find their groove through a Pac-12 schedule that provides just one REALLY SCARY road game (at Arizona State). Speaking of the Sun Devils...

You could have talked us into every South team other than Colorado over a couple of beers, but we're all aboard the Todd Graham train in Tempe. We're in the midst of a college football renaissance in the Grand Canyon State. Arizona may come in fourth on our South list, but that's due to just how DEEP the division is and not based on a lack of talent.

Arizona State, however, is the outlier in the division. New starting QB Mike Bercovici proved that he's ready to take an elite-level leap in just three games of relief work last season. While's not as adept on the run as Taylor Kelly was, he's the perfect complement to a three-pronged running game (Demario Richard, Kalen Ballage, Gump Hayes) that's going to see its load extended considerably in 2015.

The real strength of the team, though, is its defensive back seven. ASU is five-deep at linebacker and returns three starters in the secondary, with James Johnson a worthy replacement for the departed Damarious Randall. ASU's schedule is tough out of the gate, including a "neutral site" opener in Houston against Texas A&M. Regardless, they're deep enough to high-step through the conference schedule and take down Oregon at home in what we feel will be a Pac-12 title game preview.

Player of the Year

We have Wright inked in as the best linebacker in the nation this year, bar none. He was largely overlooked on the recruiting trail, but he's paying back those who met him with indifference by becoming an unquestionable star for Rich Rodriguez's Wildcats. Wright posted 163 tackles (!), 14 sacks (!!), and six forced fumbles last year (!!!). He's a one-man defense. An instant game-changer. We flirted with shifting Arizona up our Pac-12 South leaderboard based solely on Wright's presence, but we'll just leave it at this -- Wright is going to wreak havoc, make everyone around him better and he has a legitimate shot to make us look stupid by season's end.

The Utes are coming off their best season as Pac-12 member, winning nine games for the first time since 2010 and finishing with a winning conference record for the first time since their departure from the Mountain West. The defense is a question mark due to injury concerns at linebacker and a perceived lack of depth in the secondary, but we think that's overblown. The real piece to consider here is RB Devontae Booker. Booker is a defense-killer -- a grit-and-grind inside runner who average 130.1 yards per game in Pac-12 play last year. He's a luxury that'll give QB Travis Wilson some one-on-one matchups on the outside to help with improving his overall accuracy.

We're not penciling in Utah as title contenders just yet, but they'll push Arizona State and USC to their limit in the race for the Pac-12 South title.

This isn't an indictment of the conference. The Pac-12 has eight teams (three in the North, five in the South) that could bring home a Pac-12 crown if the cards fall just right. A fair amount of national outlets are penciling in Oregon for the CFP, but we're hesitant to make that declaration until we know just what the Ducks have at QB. Other than that, everyone is guaranteed to beat up on everyone and there's not one team we can single out right now to backpedal away from the field with less than two overall losses -- a # that could mean automatic elimination with how deep the ENTIRE NATION is this year.