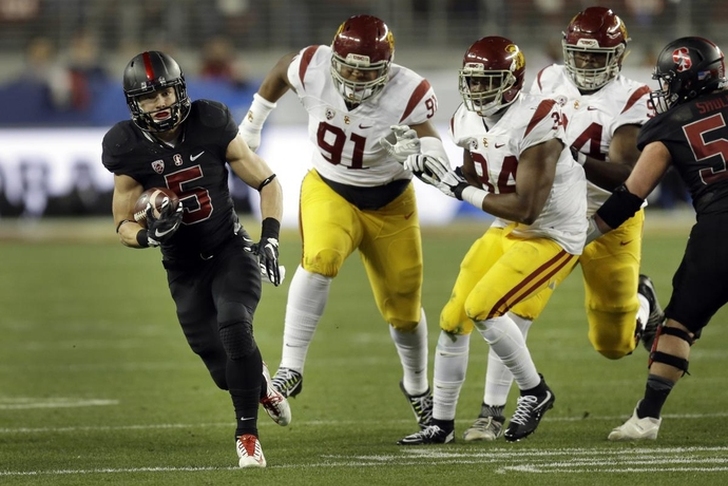 Pac-12 football was as deep as it's ever been over the course of the 2015 regular season, sending ten of its twelve teams to bowls. We expect the conference to be just as competitive this year, with several new stars ready to shine under the national spotlight. Here's how we see the conference shaking out as we head into the 2016 season:

12) Colorado Buffaloes
Colorado picked up a Pac-12 win, but it came against Oregon State and have been helpless in their other conference games. Four wins is a promising sign, but the Buffaloes haven't been able to beat quality teams.

11) Oregon State Beavers
Oregon State only had one win over FBS-level team last season, but they should be improved in year two under head coach Gary Andersen.

10) Arizona Wildcats
Arizona was been hit hard by injuries last year, but they were immensely disappointing even when they were healthy. Head coach Rich Rodriguez will have to recapture some of their 2014 magic to help the Wildcats make a bowl game.

9) Arizona State Sun Devils
Arizona State is looking to rebound from last year's disappointing season, and return just 10 starters from the team. Their success will be determined on how quickly their offensive line comes together.

8) Cal Golden Bears
Cal has to turn the page after the Jared Goff era, losing him, their top six wide receivers and five of their top six tacklers. However, Texas Tech transfer QB Davis Webb should help them challenge for a bowl berth.

7) Utah Utes
The Utes have 13 starters returning from last year's 10-win team, but questions at quarterback could limit how good they'll be this year.

6) Washington State Cougars
We're leaning towards bigger and better things fromMike Leach's squad and dark horse 2016 Heisman contender Luke Falk. Falk was a revelation for the Cougs in 2015, throwing for 4,561 yards with 38 touchdowns against eight interceptions. He's a big reason why WSU finished with their first nine-win season in over a decade.

5) Washington Huskies
Washington returns 15 starters from last year's 7-6 team, and that should allow them to make a major step forward in head coach Chris Peterson's third season. Quarterback Jake Browning needs to improve on his freshman campaign, but the defense should carry this team again as one of the best in the country.

4) USC Trojans
USC's a little lower on this list because the quarterback situation remains wide open post-Cody Kessler, but the Trojans have a bevy of returning playmakers (Adoree' Jackson, Juju Smith-Schuster, etc.) who will be returning a year older and a year better. The defense is stocked with blue-chip talent, and the return of Clancy Pendergast in the role of defensive coordinator could mean big things for the unit going forward.

3) UCLA Bruins
Josh Rosen streaked out of the gate during his true freshman campaign in 2015, and while he came down to Earth just a bit as the regular season, he's still arguably the most naturally talented returning quarterback in the conference for 2016. Jim Mora continues to do a fantastic job recruiting in the marketing shadow of USC, and his Bruins will be deep and loaded at key positions next season because of it.

2) Oregon Ducks
Transfer Dakota Prukop is the second-straight FCS quarterback to make the transition to Eugene, following in the footsteps of electric former Eastern Washington signal caller Vernon Adams. There's not enough tape on Prukop at Montana State to really get a clear picture of how he measures up to Adams, but he's going to have plenty of weapons to play with on offense -- including legit Heisman favorite RB Royce Freeman. Oregon will be a entertaining, successful high-wire act once again.

1) Stanford Cardinal
Stanford has a lot of moving parts - including finding a new quarterback and plenty of change over on defense - but running back Christian McCaffrey might be good enough to carry this team all on his own. The Cardinal will continue to play field position and run McCaffrey in every situation they possibly can think of - a winning formula that should have Stanford back in the College Football Playoff conversation.