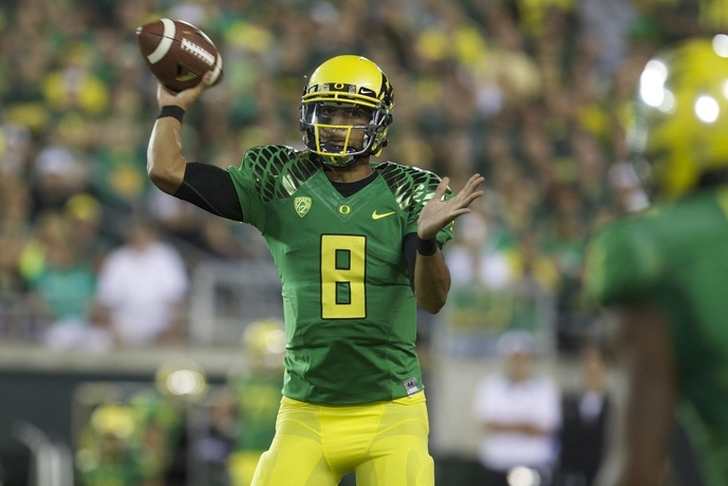 The Pac-12 has produced its fair share of talent in recent season, but which schools are the best at are producing NFL players? Only current players qualify, since this is not an all-time list. If you're wondering which Pac-12 school came in last place, Washington State, Colorado and Arizona all have just nine players. The number of NFL players is next to the team name. With that in mind, here are The 6 Pac-12 Schools With The Most NFL Players This Season:

6. UCLA Bruins (23)
The Bruins just sneak on the list. They lack true superstars, but do have quality contributors like OG Xavier Su'a-Filo and CB Alterraun Verner. Young LBs Eric Kendricks and Anthony Barr have promise. The Bruins have plenty of young talent returning to school and leaving, so they should only add to their numbers in the years to come.

5. Utah Utes (25)
Utah may not have the same amount of star names as some of the schools on this list, but they're still in the top five. The best names might be older ones; s Eric Weddle, QB Alex Smith and WR Steve Smith Sr. all played for the Utes. Younger players like CB Eric Rowe and DT Star Lotuelei hold promise.

4. Cal Golden Bears (27)
Cal hasn't won 10 games since 2006, but they've produced some solid NFL talent. WR has been a particularly good source of NFL talent for Cal, thanks to Marvin Jones, DeSean Jackson and Keenan Allen. Of course, the two biggest names are still Aaron Rodgers and Marshawn Lynch. Only nine players from Cal are on the defensive side of the ball.

T-2. Stanford Cardinal (29)
The Cardinal have undergone a resurgence thanks to Jim Harbaugh's arrival and David Shaw's steady hand. Andrew Luck is the most well-known name, closely followed by Richard Sherman.

T-2. Oregon Ducks (29)
Chip Kelly helped put Oregon on the map, and much of the current NFL players from Oregon played for Kelly for at least a season. Marcus Mariota might be the most-well known name because he's a QB, but don't forget about DT Haloti Ngata or S T.J. Ward.

1. USC Trojans (39)
It shouldn't be much of a surprise that USC takes the top spot. The team was loaded with talent during the Pete Carroll glory days, and most of that talent is still in the league. They've been a quarterback factory, with four different QBs in the league. However, some of the talent is aging and won't be around for long.