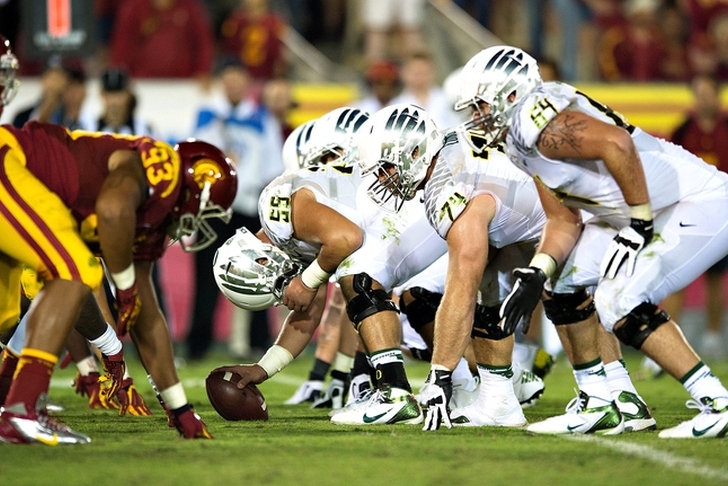 Pac-12 football is back, and we're here to ensure you get maximum couch time during the conference's biggest games of the 2015 regular season. Here's our list of The 6 Best Games In Pac-12 Football For 2015.

Here's the ultimate "trap game" for the Ducks. Stanford is adept at slowing games to a snail's pace, neutralizing high-powered offenses by controlling the clock with their ground-and-pound style and limiting the amount of series on the other side. If Stanford can keep this game in slog mode, we could be privy to a upset.

This game has directly affected the Pac-12 South title race two out of the past three years and has emerged as one of the more entertaining mini-rivalries in the conference over the past half decade. ASU will be out for blood after being thoroughly embarrassed in Tempe last year.

Jim Mora has never beaten Stanford during his time as UCLA head coach. For UCLA to take the next step and insert themselves into the conversation with the nation's elite programs, Mora will have to get the monkey off his back and take home a road victory over David Shaw and the in-state rival Cardinal.

UCLA has dominated this rivalry as of late, taking three-in-a-row from the Trojans. This game will be the measuring stick for USC heading into the next week's super-showdown with Oregon in Eugene. Cody Kessler and the Trojans offense will need to put on a show, reigniting this currently dormant rivalry with a losing streak-snapper. It's a must-win for both teams and will make for entertaining TV.

The Territorial Cup has never meant as much as it means right now. Both programs are this close to making "the leap," shedding their also-ran labels while making a legit run at the College Football Playoff. The best part about all of this? These two programs HATE each other. Pure, unadulterated, entertaining hate.

This might be college football's regular season game of the year. If both teams take care of business like the pundits are predicting, this mammoth showdown at Autzen may serve as a Pac-12 title game preview and a major boost to one team's CFP hopes. Don't blink during this one. This game could easily surpass 100 combined points like the two teams did in 2012 (a 62-51 Oregon win).