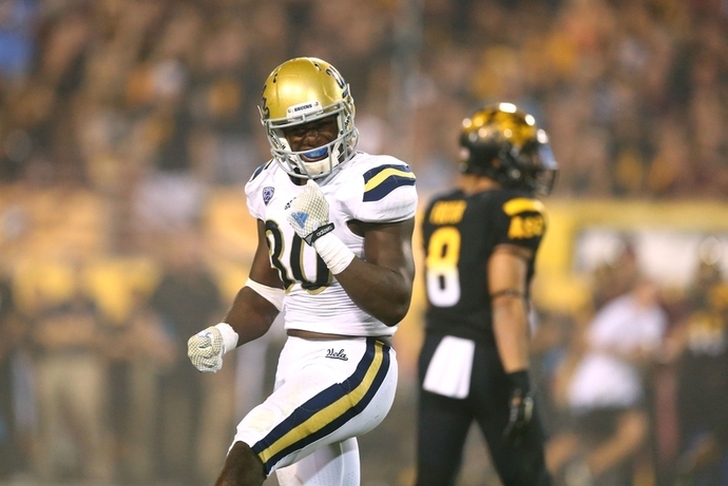 Offenses may get all the headlines, but the real test of a championship college football team is the impact their defense has on a week-to-week basis. With that in mind, here's our list of The 3 Best Defenses In Pac-12 Football For 2015.

Stanford has taken a step back defensively with stars Henry Anderson, Jordan Richards, Alex Carter and A.J. Tarpley out of the picture. Regardless, Blake Martinez and Peter Kalambayi will lead one of the better units in all of the nation, rebuilding process or not. The defense was never given enough credit during the team's 8-5 campiagn last year. Expect them to earn that recognition this year.

We've got USC at #2 and not #1 for one reason -- the departure of uber-beast Leonard Williams. It's impossible to replace him outright, but the blow will be softened by the fact that the Trojans are actually deeper on defense as a whole. Yet another year past the scholarship restrictions that stunted the program's growth, cornerback Adoree Jackson, nose tackle Antwaun Woods and safety/linebacker Su'a Cravens are poised to back up the team's explosive offense and reinforce USC's bid for College Football Playoff immortality.

Replacing NFL draftee Eric Kendricks isn't easy, but UCLA has a superstar to paper over most of the lost tackles in linebacker Myles Jack. After Jack, UCLA is extremely solid up the middle (Kenny Clark, Eddie Vanderdoes), has a sack machine in Deon Hollins and boasts one of the deepest secondaries in the nation. If true freshman Josh Rosen can keep the offense afloat, UCLA has a legitimate chance at spoiling USC's coronation as Pac-12 South champions.