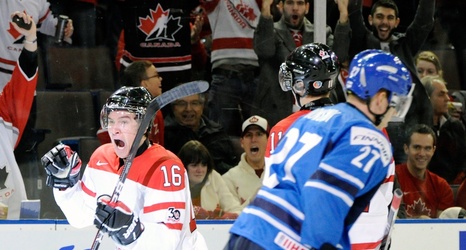 OTTAWA, ON - MARCH 8: Curtis Lazar #27 of the Ottawa Senators looks on during an NHL game against the Calgary Flames at Canadian Tire Centre on March 8, 2015 in Ottawa, Ontario, Canada. (Photo by Jana Chytilova/Freestyle Photography/Getty Images)

With an abundance of prospects in the Ottawa Senators system, some won’t become NHL players, here’s why that’s okay

The moment a player is drafted to an NHL team, regardless of where that player comes from, or whether the teams fans were happy he was taken, we typically become their biggest hype men/women.

An NHL team usually ices 18 skaters and 2 goalies per game and with teams averaging around seven draft picks per the annual NHL Draft there’s no plausible way that team can ice all of those prospects and the chances of even 2 or more of them becoming consistent NHLers is extraordinarily rare.