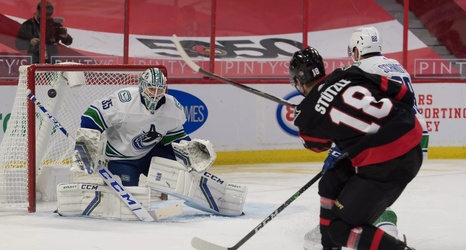 In a game where the Senators were clearly the better team, they lost. Because, of course.

In the first, the Canucks took the early lead despite the Senators outshooting and out attempting them at even strength.

Early on, the puck crossed the goal line behind Thatcher Demko but the referee intended the blow the play dead, therefore the call on the ice was no goal. It wasn’t until halfway through the first frame that former Senator Jayce Hawryluk would get the Canucks on the board.

Needless to say, there were a number of missed assignments off this draw but it was nothing compared to how the Canucks would score their second goal, eight minutes later off an absolute freebie from Colin White.