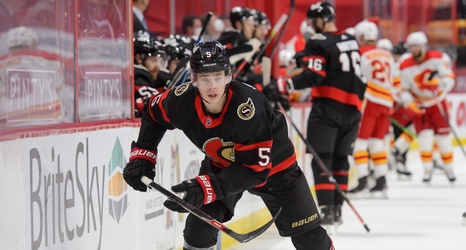 OTTAWA, ON - MARCH 1: Mike Reilly #5 of the Ottawa Senators skates against the Calgary Flames at Canadian Tire Centre on March 1, 2021 in Ottawa, Ontario, Canada. (Photo by Matt Zambonin/Freestyle Photography/Getty Images)

In two moves made late last night #PierreAfterDark struck once again when he dealt his two veteran defencemen for draft capital in the 2022 NHL Draft.

Mike Reilly was one of the more polarizing Senators prior to the trade deadline since there were rumblings of a potential extension to keep the 27-year-old defenceman in Ottawa, but that never materialized.