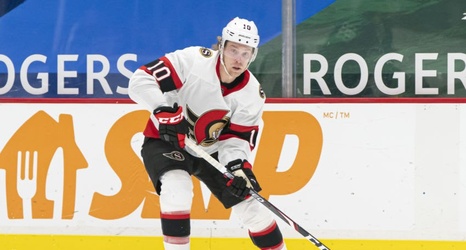 VANCOUVER, BC - APRIL 22: Ryan Dzingel #10 of the Ottawa Senators skates with the puck during NHL action against the Vancouver Canucks at Rogers Arena on April 22, 2021 in Vancouver, Canada. (Photo by Rich Lam/Getty Images)

Re-acquired in a deal with the Carolina Hurricanes, Dzingel found some success in his return to Ottawa

The former Ottawa Senator came out blazing once he rejoined the Senators in March, for the month he had 5 goals and 6 points in just 11 games while playing primarily a fourth-line role. After his hot start, Dzingel started to cool down, ending the season on a 15-game scoring drought.