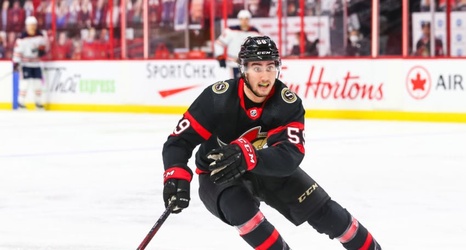 OTTAWA, ON - APRIL 7: Alex Formenton #59 of the Ottawa Senators skates against the Edmonton Oilers at Canadian Tire Centre on April 7, 2021 in Ottawa, Ontario, Canada. (Photo by Chris Tanouye/Getty Images)

Formenton played an integral role down the stretch this season, primarily playing on the 3rd line along with being a core penalty-killer

Formenton, a 2nd round pick of the Ottawa Senators in the 2017 NHL Draft, and ever since his draft day the speedy winger has been able to consistently improve. Coming into the season many didn’t expect Formenton to make the team (which he didn’t), but he arrived with the team for the final half of the season and he contributed positively to many of the Senators’ wins down the stretch.