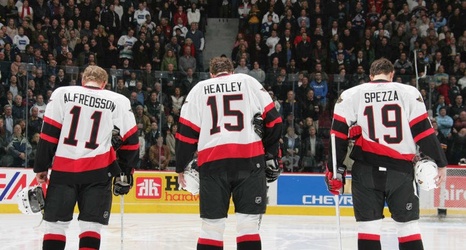 VANCOUVER - DECEMBER 9: Daniel Alfredsson #11, Dany Heatley #15 and Jason Spezza #19 of the Ottawa Senators line up during the National Anthem before the NHL game against the Vancouver Canucks at General Motors Place on December 9, 2005 in Vancouver, Canada. The Canucks defeated the Senators 3-2. (Photo by Jeff Vinnick/Getty Images)

The Pizza Line (also known as the CASH Line) consisted of the top scorers of the Ottawa Senators. They consisted of franchise legend Daniel Alfredsson, Dany Heatley the 2-time 50 goal scorer, as well as the young and up and coming centre, Jason Spezza.