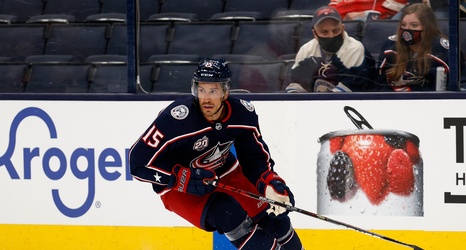 COLUMBUS, OH - APRIL 27: Michael Del Zotto #15 of the Columbus Blue Jackets skates after the puck during the game against the Detroit Red Wings at Nationwide Arena on April 27, 2021 in Columbus, Ohio. (Photo by Kirk Irwin/Getty Images)

Heading into the free agency period as “players” for the first time in a few years, the Ottawa Senators have remained relatively quiet on the market, making one trade and a few minor free-agent signings.

It appeared evident that Pierre Dorion wanted to get rid of the remaining $10 million dollars on Dadonov’s contract and he was able to fetch a solid return in defenceman Nick Holden plus a 3rd round pick.