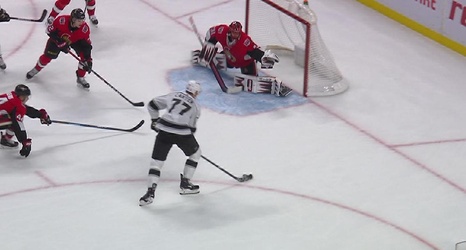 With the Los Angeles Kings in town, we bore witness to the first of this season’s true great Tank Battles. If you expected this game to be a bit of a snooze-fest between two of the league’s basement-dwellers, then the first twenty minutes would have done nothing to disabuse you of that notion. There was very little flow to either team’s game, as both teams spent much of the first frame chipping the puck in deep, failing to retrieve it, changing, retrieving a dump-in, and starting again. Some of this was good defensive play, both teams looked well-organized, but some of this was offensive ineptitude as well.