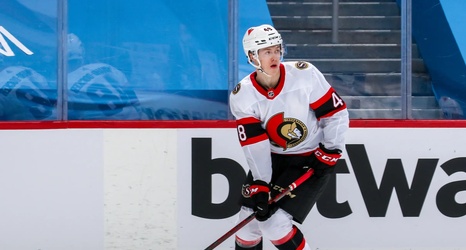 Welcome back! This week, we’re focusing on the awards given out to the team’s top defense and goaltending prospects this season. First up is Best Defenseman.

Between the NHL, AHL, and the NCAA, there were quite a few standouts, which is to be expected when you’ve got a former first-round pick from each of the last four drafts in your system. Speaking of which, let’s meet the nominees!

Jacob Bernard-Docker: The 26th overall pick of the 2018 NHL draft may not have been an offensive superstar this past year, but he did cement himself as one of the best defensemen in his conference, earning a spot on the Second All-NCHC team as well as being named the NCHC Defensive Defenseman of the Year.