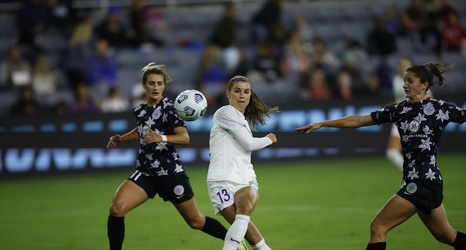 After scoring in the third minute, the Orlando Pride (7-9-7, 28 points) gave up three unanswered goals, falling to Racing Louisville FC (5-12-5, 20 points), 3-1. The loss was Orlando’s fourth in a row and officially ended the Pride’s hopes of qualifying for the NWSL playoffs for the second time in team history.

Pride interim head coach Becky Burleigh only made one change to the starting lineup from the team’s 1-0 loss to Chicago midweek. Erin McLeod started in goal and Ashlyn Harris wasn’t in the team. Backup goalkeeper Kaylie Collins and midfielder Emily van Egmond both started on the bench, the first time on the team sheet for the team’s newest players.