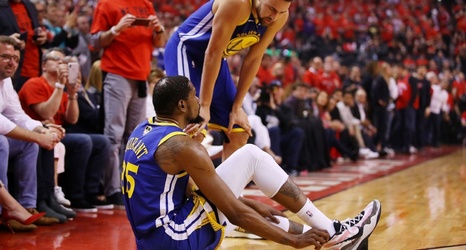 TORONTO -- Golden State Warriors forward Kevin Durant appeared to reinjure the right calf that had kept him out for a month during the second quarter of a 106-105 win in Game 5 of the NBA Finals against the Toronto Raptors on Monday night.

The Warriors said Durant would have an MRI on Tuesday to further evaluate the injury, which they announced as a right lower-leg injury.

"I'm hurting deep in the soul right now I can't lie," Durant wrote as a part of an Instagram Story post.