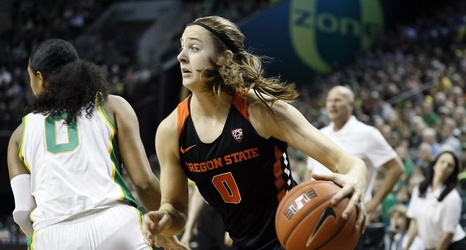 Oregon State women’s basketball alumni Mikayla Pivec was named of the nine finalists for the prestigious NCAA Woman of the Year Award this week, an accolade given annually since 1991 which recognizes “graduating female student-athletes who have exhausted their eligibility and distinguished themselves in academics, athletics, service and leadership throughout their collegiate careers”.

Back in late September, Pivec was selected as one of thirty alumnus selected for the NCAA Woman of the Year Award, a group that was narrowed down from an original list of 605 school nominees. She now sits as one just nine finalists overall and only three from the Division I level, along with Arizona State triathlete Charlotte Ahrens and Kentucky swimmer Asia Seidt.