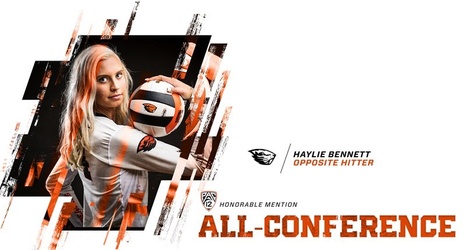 Bennett, who hails from Philomath, Ore., set career-highs in nearly every statistical category in 2019. She led the Beavers with 333 kills (3.00 k/s), attacking at a solid clip (.244) attacking from a variety of spots on the court. In addition, Bennett finished the season third on the squad with 76 blocks, including 10 solos.

A year removed from an injury-plagued 2018 campaign that included three separate injuries and limited her to just 20 matches, Bennett regained her starting spot on the right side when injuries and illness ravaged the Beavers' outside hitters during the second weekend of the season at the Hoosier Invite.