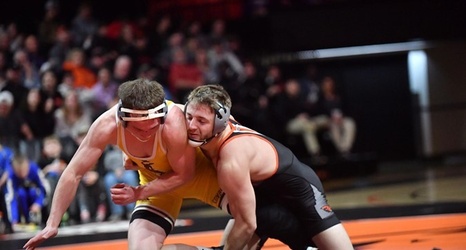 In front of a crowd of over 1103, the Beavers won four bouts on the night but couldn't string together a late comeback. Grant Willits won his sixth straight match of the year with a 12-10 decision over Wyoming's Jaron Jensen and Brandon Kaylor impressed with his third major decision of the season at 125 pounds.

The match began at 165 pounds as Aaron Olmos started things off on a positive note in a 6-4 overtime victory to put three quick team points on the board.