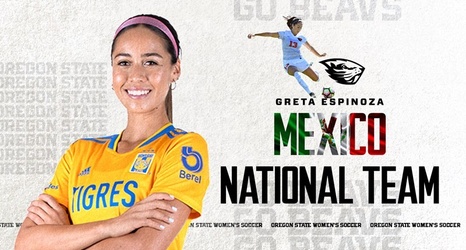 TOLUCA, Mexico - Oregon State alumna Greta Espinoza has been called up to the Mexico national team, technical director Mónica Vergara announced Wednesday. Espinoza, one of six players from the Tigres Femenil club, be joining the team for the next two matches of the Confederation of North, Central America and Caribbean Association Football (Concacaf) Women's Championship Qualifier.

The Mexico national team will compete against Surinam and Antigua & Barbuda on Feb. 17 and 20, respectively. The Concacaf Women's Qualifier will decide the qualifiers for the 2023 FIFA Women's World Cup in Australia and New Zealand.