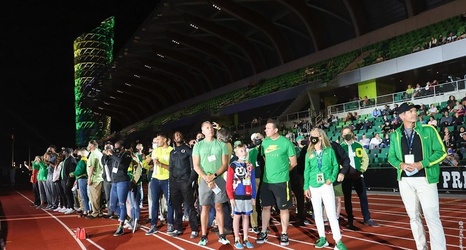 The center of the track and field universe this weekend is Hayward Field, and the stars were shining brilliantly on the first night of the Prefontaine Classic.

Friday's program featured four races at the reimagined home of Oregon track and field. Prior to the last event of the night, an official opening ceremony was held to celebrate the first year of competition at the venue, and to honor the world-class athletes both collegiate and professional who helped Eugene earn the designation of TrackTown USA.