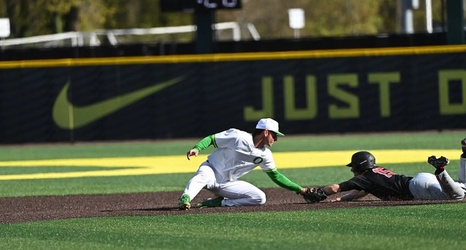 Oregon’s Diamond Ducks completed their weekend series this afternoon, with quite different results. The softball team was swept for the second weekend in a row, while baseball won 3 of 4.

Baseball - The Ducks came in having won 2 of the first 3 games, and with a chance to win the series against Ball State, the top team in the Middle American Conference. Oregon had outscored the Cardinals 25 - 14 over the first 3 games, being held to just 2 runs in the first game of Saturday’s double-header. Getting their bats rolling, as they have in so many games this season, seemed to be the key to an Oregon victory Sunday.