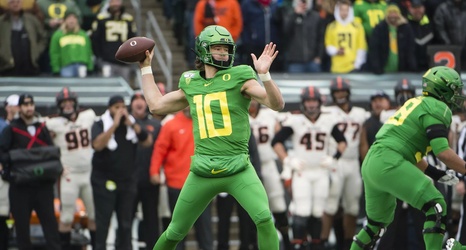 1ST QUARTER: The Beavers deferred the kickoff and Verone McKinley took it to the 30-yard line. A Travis Dye carry for a couple yards started things off then Jaylon Redd picked up 13 through the air for the first down. A batted pass by Elu Aydon on 2nd-and-7 put Justin Herbert in a difficult situation, but the quarterback was able to connect with Johnny Johnson III for another first down. A 28-yard pass to Josh Delgado had the Ducks at the Beaver 20. Oregon was forced to go for it on 4th-and-1, which Cyrus Habibi-Likio was able to convert, but four plays later Cristobal elected to kick the field goal.