Ready To Throw Down At NCAAs 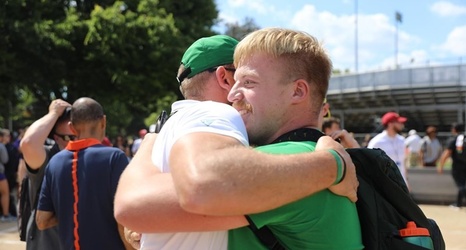 Related Topics: National Collegiate Athletic Association, For The First Time, Sleep Train Arena, Austin, A Little Bit Of, We Have

For the second year in a row, Max Lydum stepped up with a personal-best effort in the hammer throw at the NCAA West Preliminary meet. For the first time, it was good enough to get him onto collegiate track and field's grandest stage, the NCAA Championship meet.

The fact that Lydum was the 12th and final qualifier from the regional meet, on May 23 in Sacramento, Calif., did exactly nothing to diminish his excitement at having reached nationals, once it became official.

"A little bit of pandemonium broke out at that point," Lydum acknowledged last week before a training session.