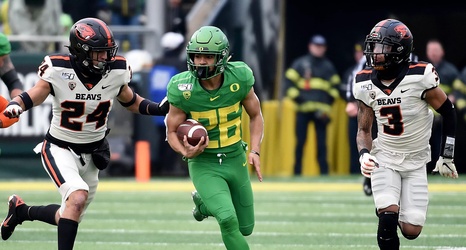 Oregonlive has 10 takeaways from the victory over Oregon State this weekend. Included are discussion of things to criticize OC Marcus Arroyo about, things to not criticize him about, and Justin Herbert finishing his last game at Autzen on a low note.

Volleyball concluded their season with a home win over Oregon State in four sets. The Ducks celebrated Senior Night and said goodbye to seniors Ronika Stone and Willow Johnson, who helped lead the victory.

24/7 Sports updates bowl projections following the Duck victory in the Civil War. The Rose Bowl remains a possibility with a win or a loss in the conference title game, though it is possible the Rose Bowl could select USC depending on how far Oregon falls in the rankings should they lose to Utah.