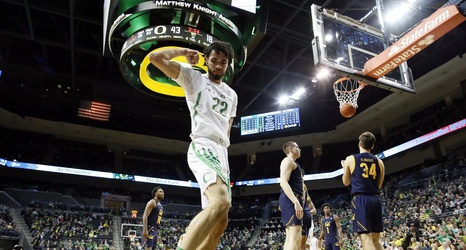 You can’t draw up a much better first half than that as Oregon remains undefeated at home with their 16th-straight win of the season at Matthew Knight Arena.

Dana Altman’s Ducks are a different team at home. If their 16-0 home record, and 5-5 road record hasn’t convinced you of that, than hopefully this game has. The Pac-12’s leader in points (20.2) and assists (5.4) Payton Pritchard led Oregon on their best shooting performance in a half, hitting 17-25 (68.0%) from the field. The Ducks caught fire in the first half from downtown knocking down 5-6 (83.3%) from beyond the arch.