Oregon Women’s Basketball: Ionescu, Ducks Get Back On Track vs Arizona 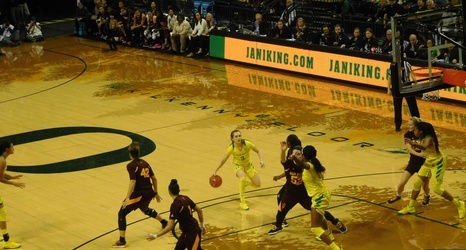 After a tough loss to Arizona State, Oregon found a way to get the win at Arizona. Over the weekend the storyline in the Pac-12 was not the Ducks 1-1 weekend, but Arizona State beating two top-five teams in both Oregon and Oregon State.

Oregon finished with three players in double figures led by Ruthy Hebard with 18. Sabrina Ionecu finished with 17 and Satou Sabally ended the game with 18 points. As the game came down the final minutes it was Ionescu who led the charge ending the game with a triple-double. At the end of the game in the post-game interview, she was so surprised she had to stop the interview and check the stat sheet.