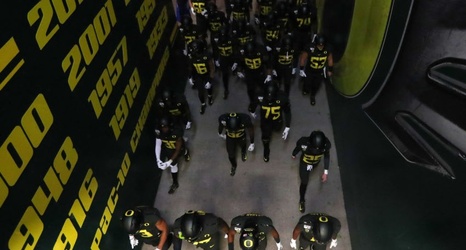 EUGENE, OREGON - OCTOBER 26: The Oregon Ducks take the field prior to taking on the Washington State Cougars during their game at Autzen Stadium on October 26, 2019 in Eugene, Oregon. (Photo by Abbie Parr/Getty Images)

While the 2020 College Football season in the Pac-12 will look anything but normal for fans, we know that games will be on television and on a national network. Two games were announced with times on Tuesday.

Both the UCLA Bruins visit to Autzen Stadium as well as the ‘midseason’ matchup with Oregon State will be broadcast by the ESPN family.