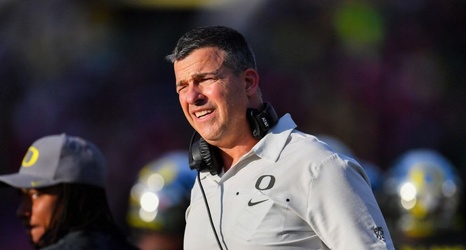 PASADENA, CALIFORNIA - JANUARY 01: Head coach Mario Cristobal of the Oregon Ducks meets with his team during a timeout in the second quarter of the game against the Wisconsin Badgers at the Rose Bowl on January 01, 2020 in Pasadena, California. (Photo by Alika Jenner/Getty Images)

A few months ago, it looked like Oregon football was in good shape with four-star wide out Tobias Merriweather from Camas, Wash.

Fast forward to mid-June and the Ducks look to be losing some steam and Notre Dame is the new leader. After an official visit to South Bend last weekend, the Irish are picking up major steam and while this may seem like just a kid being interested in a blue blood, it’s a tough blow for Oregon who had felt like the leader early on.