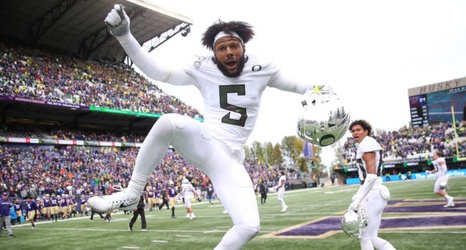 SEATTLE, WASHINGTON - OCTOBER 19: Kayvon Thibodeaux #5 of the Oregon Ducks celebrates after defeating the Washington Huskies 35-31 during their game at Husky Stadium on October 19, 2019 in Seattle, Washington. (Photo by Abbie Parr/Getty Images)

Anyone who tells you that Oregon doesn’t have enough talent returning and coming in for the 2021 season to compete for a national title just hasn’t done the research.

Oregon should be one of the top 10-15 teams in college football to start the 2021 season, if not even higher than 10. The Ducks bring back a ton of talent while also reeling in the No.