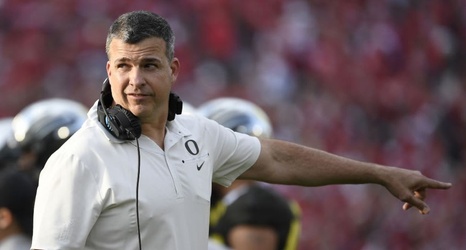 PASADENA, CALIFORNIA - JANUARY 01: Head coach Mario Cristobal of the Oregon Ducks points on the sideline against the Wisconsin Badgers during the second quarter in the Rose Bowl game presented by Northwestern Mutual at Rose Bowl on January 01, 2020 in Pasadena, California. (Photo by Kevork Djansezian/Getty Images)

Oregon Football opened Fall Camp on Friday and not only were there some new faces, but it looked a little different for the rest of us.

There was no meeting with players and coaches that typically kicks off Fall Camp in Eugene with Oregon Football. No food spread and one on ones with players getting ready for the season.