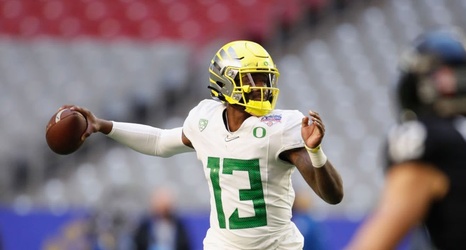 GLENDALE, ARIZONA - JANUARY 02: Quarterback Anthony Brown #13 of the Oregon Ducks drops back to pass during the second half of the PlayStation Fiesta Bowl against the Iowa State Cyclones at State Farm Stadium on January 02, 2021 in Glendale, Arizona. The Cyclones defeated the Ducks 34-17. (Photo by Christian Petersen/Getty Images)

There are always a lot of questions surrounding any football program as a new season begins. We have had a few seasons now where the quarterback questions were there, but again for this season they will be magnified.

The quarterback room for Oregon is loaded with talent and there are several players right off the bat that will be competing for a roster spot.